Edmund hears that Cornwall and Albany have fallen out and that Cornwall and Regan will be at Gloucester’s tonight. Edgar has been in hiding, and Edmund claims Gloucester knows where and that Cornwall considers him an enemy. Edmund tells Edgar that he must appear to be in pursuit of his fugitive brother, so they must draw swords before Edgar runs off. The show works on Gloucester and others after Edmund wounds his own arm: “I have seen drunkards / Do more than this in sport” (II.i.34-35). Gloucester, thinking Edgar a villain and would-be assassin, disinherits him. Cornwall and Regan support this, but seek Gloucester’s advice regarding the falling out between Lear and Goneril.

The disguised Kent and Oswald show up at Gloucester’s castle, and Kent, displaying virtuosity in “the art of the rail,” calls Oswald

A knave, a rascal, an eater of broken meats; a base, proud, shallow, beggarly, three-suited, hundred-pound, filthy worsted-stocking knave; a lily-liver’d action-taking, whoreson, glass-gazing, superserviceable, finical rogue; one-trunk-inheriting slave; one that wouldst be a bawd in way of good service, and art nothing but the composition of a knave, beggar, coward, pandar, and the son and heir of a mungril bitch; one whom I will beat into clamorous whining, if thou deni’st the least syllable of thy addition. (II.ii.15-24)

Edmund enters, as do Cornwall, Regan, Gloucester, and other. Cornwall halts the fight, but Kent is still ready: “My lord, if you’ll give me leave, I will tread this unbolted villain into mortar, and daub the wall of a jakes with him” (II.ii.65-67). After listening a bit to Kent and Oswald, Cornwall declares Kent to be someone “having been prais’d for bluntness” (II.ii.96): “He cannot flatter, he, / An honest mind and plain, he must speak truth!” (II.ii.98-99). He detests such knaves, and after Kent satirically mocks courtly language, Cornwall sends Kent to the stocks. Regan is pleased; Gloucester isn’t. In the stocks, Kent reads a letter from Cordelia who knows of his honorable actions and is worried about her father. Kent acknowledges the wheel of Fortune and falls asleep.

The harried Edgar has hidden in a hollow tree to escape. Now he’ll smear dirt on himself and wear a blanket, going about in disguise as a “poor Tom” (II.iii.20) — a Bedlam beggar. The sixteenth century had its own version of Reaganomics resulting similarly in rampant homelessness (or monasterylessness) for the impaired.
“Edgar I nothing am” (II.iii.21). “Why does Edgar assume the lowest possible disguise? Is he punishing himself for his own credulity, for sharing his father’s inability to see through Edmund’s brilliant deceptions?” (Bloom 480).

Lear and the Fool come to Gloucester’s castle and encounter Kent in the stocks, who tells of the influence of Goneril’s letter on Cornwall and Regan when delivered by the servant Oswald. Lear is furious and demands to speak to Cornwall and Regan. Gloucester tries to be diplomatic and calm Lear. Lear greets Cornwall and Regan, and Kent is set free. Lear then explains about his treatment at Goneril’s, but Regan leans towards her side and thinks Lear should go back and apologize. Lear curses Goneril, insisting that Regan is kind. Lear says to Regan, “‘Tis not in thee / To grudge my pleasures, to cut off my train, / To bandy hasty words, to scant my sizes” (II.iv.173-175). The last line contains specialized Cambridge University terms referring to punishment for undergraduates[Derran Charlton, “Cambridge University ‘Implications.'” Shakespeare Oxford Newsletter 44.2 (Spring 2008): 6-7].

But soon Oswald and Goneril show up. Regan is courteous to Goneril and reasons that Lear should dismiss half his men and return to Goneril’s home. The sisters gang up on Lear, arguing that he needs no more than fifty, then twenty-five, then ten or five, then no followers. Lear rants about nature and madness and calls the two “unnatural hags” (II.iv.278). He unconvincingly promises a cataclysmic vengeance:

No, you unnatural hags,
I will have such revenges on you both
That all the world shall — I will do such things —
What they are yet I know not, but they shall be
The terrors of the earth! You think I’ll weep:
No, I’ll not weep. (II.iv.278-283) 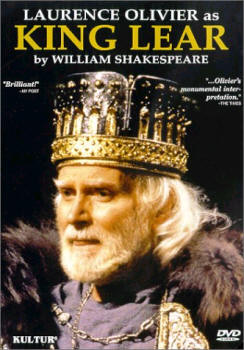 As a storm begins, Lear leaves with Gloucester, Kent, and the Fool. The sisters cluck for a moment before Gloucester returns, informing them that Lear is wandering out in the storm. They don’t care: “Shut up your doors” (II.iv.304, 308).